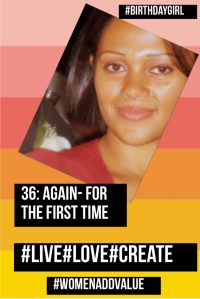 July 21, 2014, exactly a year ago, I woke up with much excitement and great birthday expectations. At the same time, part of me secretly struggled to admit I was turning… “38”. For some reason I could not accept my age reaching such high numbers… anyways, as I console myself with positive reasoning, I still decided to do the math. Yes, I actually grabbed a calculator and subtracted: 2014-1977= ___ To my great surprise, the answer was 37! I was not 38, I was 37! lol

Now, you might think this was good news for me, well yes, but just for a min. It wasn’t long before I realized I had totally missed out on being 36. I had lived a whole year behaving, aching and believing I was a year older.

Can you image that?  I felt cheated!  I spent the rest that day analyzing the factors that had led me to forget a whole year of “youthful living”. Now if you, who are reading this, are younger than 36, you may find my concern to be invalid, but if you are older, you know how precious the low numbers are. So, I continued to think of the clothes I had worn, the styles, the colors, the places I had not visited, the jokes I had not laughed at, just because I had to “act my age”.

I realized, I had been too busy, too involved and preoccupied with the nonsense of life.

Finally, I came to terms with reality, and decided to be thankful for being 37, at least I had another year to not be 38. lol

NOW, the great news is that, throughout my 37th year, my life was blessed beyond my imagination could ever fathom. Literary, my life took a turn toward abundant living. Did it mean shedding layers of rejection, insecurities, confusion, religion? YES. Did it take a new mentality? YES. Did it take new friends? Yes. Did it take a new God? NO, He is still the same, He does not change, I had to change  in order to understand his Love and to know Him better.

Only 12 months later, my life is different. Now at 38, my sphere of influence has increased from local to global. My friends continue to be close, faithful, and handpicked. The only difference is that I do not have to look for them. At the level that my life flows, my friends just seem to adhere to my life and my calling.

Just last week, one of my new friends, offered to stand by me if I chose to live 36 Again and for the First Time. I consider that offer, one of the greatest gifts I can receive today. To have friends who love me enough to make the lost be found!! I am ready to regain the youth and fun of 36, and perfect the wisdom of 38!

As Fuerza y Honor Ministry Overseer, Dr. Jenny has a passion for carefully unpacking the truths of Scripture. She has served as founder and Senior Pastor at her local congregation for over 7 years and as a teacher of Bible Truths for over 23 years, leading many to Christ. Jenny has also ministered in other countries and with her state certification in education and Honorary Doctorate in Humanities and Bible Counseling she heads Fuerza Y Honor Seminary for ministry and leadership. She has a heart for women and their unique calling into the Kingdom of God. View all posts by Dr. Jenny Lopez Lowe

One thought on “36:Again-For the First Time by Dr. Jenny Lopez #”